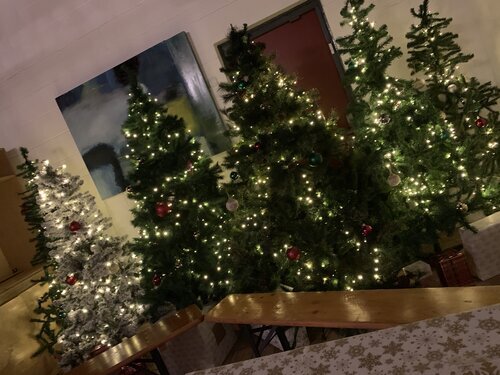 On Sunday 21st November (or Stir-up Sunday) the Christmas Pudding curious joined us at Taste and Tour HQ for an afternoon of festive frivolity as we prepared to prepare our puddings for Christmas Day!

Under this guise, we exercised the timeless mantra of “feck it, it’s Christmas” and cracked open the Champagne and Cognac for a right old seasonal shin-dig! With no shortage of Christmas jumpers, a veritable forest backdrop of “Norwegian Spruce”, at least 6 loops of Caroline’s Christmas playlist and of course a crackling open fire for dramatic effect, (albeit on a tv screen - fire safety and all that!) we embarked on a quest of immaculate pudding making.

Guests arrived to a hot brandy punch which seemed to tickle their tastebuds in all the right ways as each group requested the recipe for their own Christmas gatherings. So as promised, for you and to all our pudding party-goers, you’ll find the recipe at the end!

Kicking off the afternoon we had Alex Johnston from Hennessy NI tell us all about the history of Hennessy Cognac - never ones to venture too far from local products, even this special PGI status French brandy has roots in Irish heritage. Founded by Richard Hennessy in 1765, he was an Irish officer serving in the army of Louis XV. Très bien Monsieur!!

Enter Stephen Chisolm. Stevie is the 2013 Great Irish Bake-off champion and master baker who was our ‘special’ instructor for the day. Guests firstly heard the fascinating history of the Christmas Pudding as well as the significance of Stir-up Sunday.

The Christmas Pudding is steeped in as much tradition and folklore as it is brandy! The name comes from a prayer rather than the actual stirring, but who are we to get in the way of a great title. The youngest family member should have the first stir (usually they are the one to start things!) and the eldest stirs last, but by no means least, each making a wish as they stir. The pudding is set alight not to add a faint taste of brandy but to take us back to pagan times, so we want to see some dancing around the flames this year people, you have been warned! What started as a stewed broth rich with currants and first heard of in 1420 moved on to the plum pudding, that we all recognise today, thanks to the Elizabethans and their addition of prunes. In those days, plums were any dried fruit. I might stop now, you can imagine how fascinated my family are when I start my pudding chat on Christmas Day……..

Stevie led a detailed demonstration to show guests each element of the pudding construction and this was followed by the fun part, or perhaps we should say messy part - assembling our own! We all got our wish for a White Christmas as clouds of plain flour puffed around the room…and the floor…and our hair…

But you couldn’t have all that hard work without something refreshing to go along with it so out came the seasonal G&T’s - Method and Madness gin with dehydrated orange slice and a cinnamon stick. If you haven’t tried Method and Madness gin yet, it’s a must! One of the newer Irish gins on the market, a super-premium iteration from the magnificent minds at Midleton Distillery in Cork.

I think everyone attending would agree, the trickiest part of the pudding making process was actually tying the string around the finished article! So with a little help from the most dextrous amongst us, we got there in the end and just in time for some festive nibbles! Sarah from Little Pink Kitchen arrived with some freshly baked sausage rolls, homemade brie and cranberry parcels and her famous smoked beetroot hummus with crudities. Yum!

So with our puddings ready for steaming at home, we were left with a burning question…what do we do with the left over pudding? (Obviously, a hypothetical question as we doubt there will be any).

Cue Stephen who whips out his trusty KitchenAid mixer and produces probably the greatest invention of our time - LEFTOVER CHRISTMAS PUDDING COOKIES! For the love of all that is good in the world, these cookies were magnificent! Again, as a very special treat, you’ll find the recipe at the end. We have all decided to buy a pre-made pudding just so we can make them before, during and after Christmas!

So a busy afternoon meant there was just time for one more cocktail for the road and we kept the very best until last!

“The French 125” - as rich in history as it is in flavour, elegant and refreshingly sparkling as it’s topped with Moet and Chandon champagne… but beware, it packs a punch!

We sipped our champagne cocktails, munched mince pies and gathered up our puddings to head home for steaming or in some instances, head home steaming…

One last treat though, no Christmas pudding would be complete without some brandy for the big reveal on Christmas Day, so everyone got a little hip-flask of Hennessy to take home and flame their puds!

Thanks to everyone that helped us make it happen, to Alex for making it boozy, to Stephen for his amazing Christmas Pudding and cookie skills, to Sarah from Little Pink Kitchen for the soakage and to everyone that spent their Sunday stirring it up with us at Taste and Tour HQ!

We hope you’re as excited for Christmas Day as we are!

Add all ingredients except Brandy to saucepan and heat over low to medium heat until warm and aromatic.

**Note - add the brandy to the glass (not the hot mixture) just before serving.

Cream the butter, sugar and eggs together. Beat in vanilla extract.

Sift dry ingredients together except oats. Add to butter mixture.

Stir in the pudding, syrup and then oats and mix well.

Roll into 50g balls and place on the tray leaving a gap between biscuit.

Bake for 10-12 minutes until light, golden brown at the edges.

Cool before dusting with icing sugar.